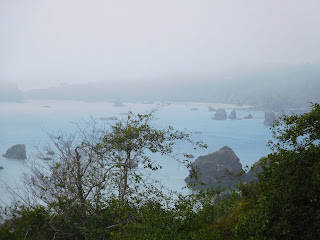 In July, World Forest Institute Fellows and staff traveled to the north coast of California to join foresters, scientists, and historians from the US National Park Service for a day of international exchange and tour of active forest management projects in the park. The group was joined by graduate students from Humboldt State University (HSU) and summer apprentices from the non-profit Save the Redwoods League.

Based in Trinidad for three foggy, chilly nights, the WFI group explored the big tree trails in Prairie Creek and Jedidiah Smith State Parks near Klamath and Crescent City. They also enjoyed a massive logger’s supper at the historic Samoa Cookhouse in Arcata. Shout out to Harry Merlo, Jr. for the recommendation.

Since 2016, the WFI fellows have been invited to Redwood National Park headquarters in Orick to give a morning seminar about their countries and forestry projects. The Park Superintendent Steve Mietz welcomed the group and more than 30 employees and guests attended, including former Director of California Department of Forestry Andrea Tuttle.

Protection of small redwood groves in picnic areas and state parks that now comprise Redwood National and State Parks was established in 1968 along Redwood Creek, and consisted at the time of a narrow strip (aka “the worm”) of tall trees along Redwood creek. The national park was expanded in 1978 to include much of the Redwood Creek drainage which previously had been in private ownership, logged, treated, and re-seeded. Early watershed restoration work in the park focused on removing logging roads and planting trees to reduce erosion. 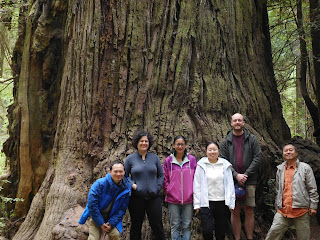 Following the WFI seminar, the group set out to inspect several projects. National park geologist Neal Youngblood shared historic maps and information about old road-building methods and the importance of upland restoration to future water quality and improvement of aquatic habitat in the lowland areas of the park. Decades of flooding have flushed “big pulses” of soil, rock, and old logging debris into coastal streams. The group inspected successful projects in the lower Lost Man Creek drainage near Elk Prairie.

National Park Service Forester Jason Teraoka conducted a tour of the Lost Man Creek forestry projects, including meeting with contractors actively working on site. Many of the areas now inside the park were harvested in the 1950s, 60s, and 70s and regenerated with a heavy mix of Douglas-fir. A small thinning project in second growth on the park’s eastern boundary occurred in 1979 but was discontinued. 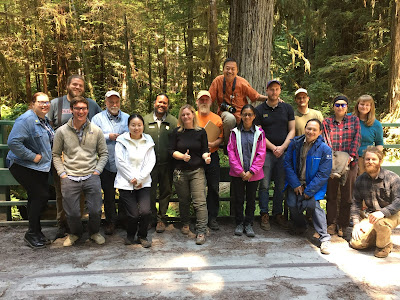 Research and demonstration projects conducted in the second growth forest off the Bald Hills Road tested various spacing and density prescriptions over several years in conjunction with faculty and students at HSU. After a lengthy review, forest restoration projects proposed by the National Park Service were approved and commenced in 2009 above the South Fork of Lost Man Creek.

Careful monitoring of the project and early results from established plots were encouraging. A second phase of the project was proposed by the Park Service and variable density thinning continued north along the Holter Ridge Road north into the Middle Fork of Lost Man Creek. Planning is underway to conduct additional projects in previously logged sections on the national park south of Prairie Creek State Park.

Plan your visit to the Redwood National and State Parks here:

It's difficult to think of something more important in our daily lives than clean water, so it only makes sense that the WFI International Fellows' latest study tour was to the Bull Run watershed, the source of municipal drinking water for roughly a million people in the Portland Metro area, including the cities of Portland, Sandy, Gresham, and Tualatin. This region's daily water consumption in the winter is roughly 80 million gallons; in the summer, that number can double to 120 - 160 gallons. We took part in a guided tour that is open to the general public and led by the Portland Water Bureau to raise awareness about our public drinking water. It was a full day of learning and beautiful scenery as we wound through a network of forest roads and along watershed infrastructure, including dams, reservoirs, and groundwater pumps.

The Bull Run watershed, a 147 square-mile watershed that is jointly owned and managed by the U.S. Forest Service and Portland Water Bureau, is perfectly positioned to serve as Portland's water source. Located only 26 miles from the city of Portland, where the average annual rainfall is 36 - 40" per year, the Bull Run watershed receives over three times as much rain (roughly 135" per year). The area was formed by a landslide between 7,000 - 8,000 years ago; talus slopes and signs of ancestral flows from the Columbia River can still be seen from the roads. Bull Run Lake is separated from nearby Mount Hood by a ridge, which plays an important role in preventing glacial till (consisting of fine particles that are difficult to filter out) from reaching the watershed. In fact, drinking water from the Bull Run is generally clean enough to serve to the public unfiltered, due to the forest's natural filtration system and the local basalt-dominant geologic makeup (basalt is very heavy and does not break into fine particles when in contact with water).

The idea for the creation and management of the Bull Run watershed as a source of drinking water for the Portland area began in 1885, when the city's water committee hired Colonel Isaac Smith to survey the watershed. By this time, the Willamette River suffered high contamination levels due to heavy industrial use, leading the water committee to come to a decision to search for an alternative source of drinking water. Construction on the Bull Run water system began in 1892 but official management of the watershed did not begin until 1895 due to multiple vetoes by then-Governor Sylvester Pennoyer, who expressed concerns that water "from Mount Hood would cause goiter in the fair sex" (despite the fact that water from the Bull Run does not originate from Mount Hood; see preceding paragraph). Upon being served the first glass of water from the Bull Run, Governor Pennoyer spat out the water because it "lacked the body that water from the Willamette River has." By "body," Governor Pennoyer must have meant "contamination!" Fortunately for the rest of us, water from the Bull Run gradually gained public approval.

The use of the Bull Run watershed as a source of drinking water has necessitated its preservation since the watershed's inception. In 1892, President Benjamin Harrison created the 222 square-mile Bull Run Reserve via presidential decree. This decree led Colonel Isaac Smith to buy back some of the private land claims throughout the watershed for the sake of expanding the reserve. The last private landowner to own property in the Bull Run was Charlie Larsen, whose property was sold to the local government by his children after his passing in the 1970s. In 1904, President Teddy Roosevelt implemented the Trespass Act, which designated the maintenance of water quality as the management priority for the Bull Run, thereby limiting access to people and domesticated animals. However, in the post-World War II era, industrial logging activity increased in the region, resulting in 300 miles of logging roads being built and roughly 22% of the watershed being clearcut. These activities alarmed Dr. Joseph Miller, a surgeon from Portland, who partnered with the Sierra Club in the 1960s to spread public awareness through the distribution of informational pamphlets. In 1972, Dr. Miller successfully sued the Portland Water Bureau for violating the Trespass Act. This court decision stopped logging activity in the Bull Run watershed until Public Law 95-200 established the Bull Run management unit as it is today. This continued until the 1990s, when a late-succession forest reserve was set aside for the federally endangered Northern Spotted Owl, which ended all logging in the Bull Run watershed except for the removal of windfall or hazard trees. Finally, in 2001, the Little Sandy Protection Act added a buffer zone around the watershed where logging is prohibited. Due to these environmental protections, 53% of the Bull Run watershed remains old-growth forest.

What's next for the Bull Run watershed? The U.S. Environmental Protection Agency (EPA) recently ruled that Portland Water Bureau has 10 years to implement a water filtration system in the Bull Run. This is due to low but infrequently present levels of Cryptosporidium that have been detected in the watershed starting in January 2017. Cryptosporidium is a genus of protozoa genus that can cause respiratory and gastrointestinal illness in humans, is spread by mammals, and possesses a hard shell that is resistant to chlorine treatment. Up until recently, Portland was the only city in the country to be granted a variance from the EPA's LT2 rule, which states that every water supplier is required to treat for Cryptosporidium, due to its absence in the Portland area. Despite the still-low levels of Cryptosporidium in the Bull Run watershed, the decision to begin filtering water from the Bull Run was made in August 2017 due to the filtration system's ability to filter out not only Cryptosporidium but also airborne particles resulting from nearby wildfires, the frequency of which is increasing with climate change.