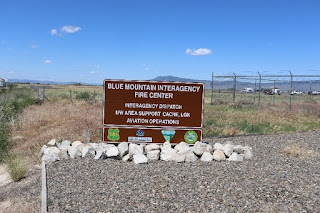 As a good citizen, if you see a fire, you call 911 to report it. The response to the call could vary from no action, if the fire is immediately stopped, to hundreds of firefighters, engines, and aircraft in the case of an incident type 1.

But how is the incident response managed?

First, your 911 call arrives at one of the dispatch centers located across the country. The call is collected by a dispatcher, a person who receives reports of the discovery and status of fires, confirms their locations, acts promptly to provide the people and equipment likely to be needed for the initial attack, and sends the resources to the proper place. The Blue Mountain Interagency Dispatch Center (BMIDC), based in La Grande, Oregon, is the interagency focal point for coordinating the mobilization of resources for wildland fire, prescribed fire, and other all-risk incidents throughout northeast Oregon and southeast Washington. The Dispatch Center also provides Intelligence and Predictive Services related-products to support wildland fire managers and firefighters throughout its zone of influence. After the fire you reported to 911 has been located on the map, depending on who owns the land, the appropriate stakeholder will be contacted for the initial response.

On private forested land, the Oregon Department of Forestry (ODF) would take charge of the incident response. As Oregon’s largest fire department, ODF's Fire Protection program protects 16 million acres of forest, constituting a $60 billion asset. These lands consist of privately-owned forests as well as some public lands, including state-owned forests and, by contract, US Bureau of Land Management forests in western Oregon. ODF is also part of an extensive fire protection network that includes landowner resources, contract crews and aircraft, inmate crews, and agreements with public agencies across Oregon, the US, and British Columbia. ODF's firefighting policy is straightforward: Put out fires quickly at the smallest size possible. Most of the lands protected by the agency are working forests that produce revenue and support jobs. It is crucial to prevent fire damage to the timber resource that is an essential element of Oregon’s economy. This aggressive approach to firefighting also safeguards ecosystem values, such as fish and wildlife habitats.

On federal land, the incident response depends on which agency manages the land; the US Forest Service or US Bureau of Land Management could be engaged. Close to the BMIDC and along the airport tarmac are situated different headquarters of air tank companies and some of the best firefighter crews, all ready for action once the fire season has started. An interesting example of the Federal Wildfire Incident Response are the BlueMountain Rappellers. Kelly Hedgepeth, Blue Mountain Rappel Base Manager, explained that the base is one of six rappel programs in the Pacific Northwest Region and is composed of a Type-1 Crew that staffs a Regional Initial Attack Helicopter. The mission is to provide a highly trained and qualified aerial-delivered firefighting force.

On private and public lands, private companies are hired during incidents for implementing material, engines, aircraft, and personnel. An excellent example of this is Columbia Basin Helicopters, Inc. Established in 1996 and based in La Grande, Oregon, the company performs aerial application and firefighting. In addition to helicopters, the company operates a number of fixed-wing, single-engine air tankers for state and federal agencies. During the fire season, the crew is operational 24/7. Columbia Basin Helicopters operates four UH-1H helicopters, two K-1200 K Max helicopters, and five Air Tractor 802 SEATS aircraft.

An International Fellow’s Thoughts and Perspectives

As a firefighter myself, it was very exciting to go and visit strategic points of operation for wildfire incident response. In France, a single national agency oversees all incidents without distinction of land status. Here in the US, as each landowner must manage their own wildfire risk prevention, many more stakeholders operate, individually or collectively, in response to wildfires along with federal, state, tribal, and rural fire agencies and private companies.

Another interesting point is, as lightning fires represent more than 50% of wildfires in the Pacific Northwest (compared to 2% in France), the importance of aircraft response to wildfires. Many specific crews, such as the Blue Mountains Rappelers in La Grande and Smoke Jumpers and Hot shot crews are commonly engaged by air force in the initial attack, thereby avoiding wildfire development that can become far more problematic.

On the other hand, as a forester, in both countries, I always interrogate myself about the huge difference in two competing budgets: increasing allocations for wildfire response, including aircraft, fire engines, firefighters, and logistics compared to poor investment in our forests in terms of protection issues and ecological rehabilitation. My position in Provence, France, between olive trees and lavender fields, is also concerned about these same components but also, as is the case with every forester, about watershed preservation, ecological habitat protection, timber production, and all the forest benefits that we can and cannot imagine.

Increasing drought and warm-season periods are posing a wildfire threat all around the world. With the help of research synthesis, public demand, environmental issues, and concerns regarding the protection of human infrastructure, politicians and decision-makers should emphasize the importance of collective forest investment to enhance the environment and preserve it for the next generation.
Posted by vbui at 1:11 PM